Skip to content
Board Game Review: Munchkin
board games

Last week, I covered the first digital adaptation of Steve Jackson’s Munchkin card game. In that article, I mentioned a number of the different editions and variations of the game […]

Last week, I covered the first digital adaptation of Steve Jackson’s Munchkin card game. In that article, I mentioned a number of the different editions and variations of the game – which seems to be an ever-growing list with some surprising, sometimes odd choices for themes.

The only Munchkin edition I own is Munchkin Cthulhu, but this review pretty much applies to any of the base editions of Munchkin – the themes may be different and there are slight variations in the basic rules for each, but general positives and negatives for the basic mechanics and the way the game plays should be pretty universal.

Starting life as a parody of D&D players whose only interests are in killing monsters and grabbing loot regardless of what happens to their companions (perhaps more modern, computer-focused gamers would recognise this type of player as a ‘Leeroy Jenkins’), Munchkin exploded in popularity due to its simplicity, capacity to inspire fun interaction with players and a willingness to expand beyond the original target of its satire.

There are two decks in Munchkin – Door and Treasures. Each player starts at Level 1, with a hand of cards (an equal number from each deck). If the player has any Race or Class cards in their hand, they can immediately play one of each type (these give the players specific bonuses and/or advantages, depending on what Race and/or Class they become).

Items can also be played immediately, with the following rules: a player can have one hat, one item in each hand (some cards specify that the item is two handed, so naturally they can only have one of these), one item for their feet (usually boots!) and one armour item.

On a player’s turn, they ‘kick down a door’ – which is carried out just by turning over the top card of the Door deck – and deal with whatever is turned over. If it’s a Monster card, they must try and defeat it, which is achieved simply by the player’s current level number plus any bonuses in play being higher than that of the monster. Killing a monster will raise the active player’s level by 1 (with the overall objective being to reach level 10 to win the game) unless otherwise specified on the Monster card – and treasures can also be drawn upon defeating a monster. If it’s not a monster, it’s usually a Curse – but once that’s dealt with, players can either ‘look for trouble’ (that is, play a monster card from their hand and try to beat it as they would with a monster that’s normally revealed from kicking down a door) or ‘loot the room’, which involves drawing a Door card into your hand. 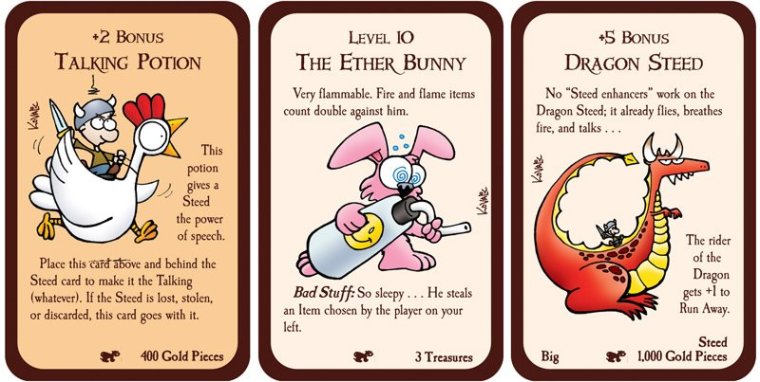 Those are the basics of a turn, but there’s more involved, especially from a combat point of view. The active player may not be able to defeat a revealed monster; they’re allowed to receive the assistance of one more player, who adds their own level plus bonuses to the attempt to defeat the monster. In order to secure this help, players can offer to split the treasure reward for defeating the monster (specified on the card) in any manner they choose. To add to this, any player can raise or lower the monster’s level using modifier cards they have in their hands to make life difficult (or even easier!) for the active player. If a player fails to defeat a monster, the effect of Bad Stuff, listed on the card and different for each monster, is carried out.

If the player dies, they lose all of their stuff (but keep their race, class and level – unless specified in a monster’s Bad Stuff description). The other players get to ‘Loot the Body’, which means that they get to choose one card from whatever the player had in their hand when they died or from the item cards they already had in play (excess cards are discarded). They only stay dead until the next player begins their turn, though have to wait until their own turn comes around to draw a new hand of cards.

It’s a relatively simple game and can be a lot of fun, especially with a group who are willing to engage with its silliness. No opportunity for a pun or silly joke is missed despite the often bewildering number of cards and monsters in a set. They’re not always laugh out loud funny – in fact, few are – but they are, at the very least, amusing. John Kovalic’s art has always been a strong point in selling the humour at the heart of Munchkin, as well as giving the game a very identifiable and appealing visual aesthetic.

One area Munchkin has always struggled – in my opinion – is with the rules. For such a (relatively) simple game, the rules have always been an absolute mess. There’s a variety of FAQs available online and even with later rulesets included with games, but it really shouldn’t be this way at all, especially now we’re almost 20 years into the game’s availability. Admittedly, the crazy variety of sets and wrinkles that each can bring to the table can make life difficult for players when mixing and matching the various sets, but the rules can – and should – be easier to digest in each edition.

Another issue with the game is that of the chaos that’s baked into the concept; due to the fact that kicking down a door could lead to, for example, an utterly impossible monster (regardless of any help offered or given) on any player’s turn, at any time, it can be frustrating to play. Along with this, the randomness of the cards a player can have access to at any time means that success – or failure – can feel much more the result of complete luck rather than anything the players can do to influence the game’s outcome. The game can sometimes outstay its welcome in terms of length due to this randomness too.

It’s not intended to be a deeply strategic, highly competitive game though. Which is fine! It’s just a shame that the chaotic nature can be a little too chaotic at times. What Munchkin is good for is playing with players of varying age and experience, as there’s never an advantage for someone who’s played before, aside from them being familiar with the sometimes confusing rules.

Whether or not you enjoy Munchkin will definitely depend on how seriously you take your game time, but there’s definitely appeal in playing a silly game with a group that’ll appreciate the theme of whatever edition of Munchkin you have access to. The bewildering number of expansions – sometimes specific to certain themed editions and the often incredibly inventive nature of them (Munchkin Temporary Tattoos exist, for example – which, when applied to yourself and revealed, can give in-game bonus effects) can keep the game fresh and a lot more fun than just having the base game, though be warned – continually adding expansions to the decks you have available to play with will increase both the chaos and (potentially) the length of the game too, so do use these sparingly if possible!).

It’s a cautious maybe, then, to the question of whether or not I recommend Munchkin as a game you should check out. It’s not without issues and it’s a little too random for my tastes; but there’s no doubting its status as a genuine success within gaming circles. It can be a bit of light hearted fun, especially with a group of people who may not normally be up for board games – and the feel of having a level playing field regardless of how often you have (or have not) played it is a definite plus point that very few games offer.