The Switch has its fair share of 2D platformers and a number of endless runners too. Hybrids of the two are rarer, however – and Scrap falls into this mix of genres. Though it’s a 2D platformer in appearance, the continual, unstoppable movement of the main character does lend it the air of an endless runner, which sets it apart from other, similar looking games.

We start with a cute, charmingly animated cutscene in the style of the main game. Awakening suddenly in a nightmarish and dangerous factory, Scrap decides to escape – and you’re put in charge of getting him out. Controls are very straightforward; Scrap can jump – and double jump – with A, or drop from the platform you’re currently on with B. The eShop page boasts that Scrap can be played one-handed – which is true, given that his forward movement is completely automatic. 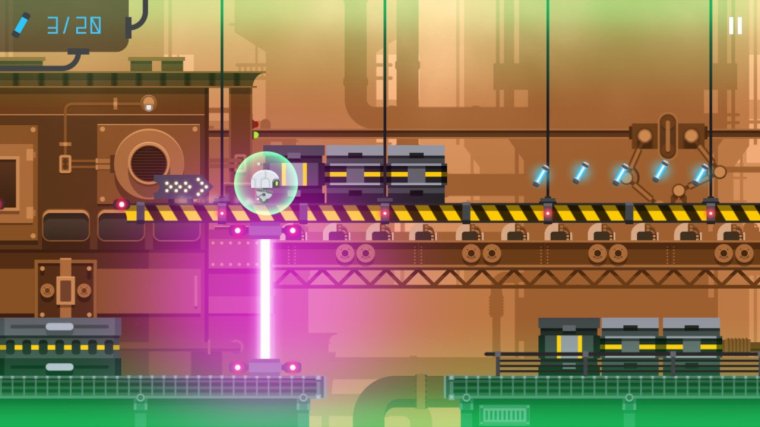 As mentioned, the factory is a dangerous place; there are numerous obstacles and deadly pits to avoid. Other, far nastier looking robots than Scrap are also present – and they won’t hesitate to use their lasers to destroy you. One hit and you’re back to the last checkpoint; once you’re past the initial few levels and have been introduced to the basic mechanics – as well as some of the power ups you can pick up on your journey – there’s a great deal of somewhat unforgiving level design, so you’ll be pushed back to these checkpoints quite a lot.

There are 33 levels to make your way through in Scrap, with three achievements to reach on every level. There’s a further eleven levels and a new world coming soon as free content, too. Though the game is often punishingly difficult, unlike typical endless runners the levels aren’t randomly generated – so learning and overcoming them is a matter of persistence and quick reflexes.

Scrap has a charming and appealing visual style; in stark contrast to the lead character’s rounded edges and bouncy animation, the factory itself is composed of harsh, straight angles with lethal, glowing lasers emitting from traps and the imposingly large enemy robots. Special mention must also go to the music, which is a great accompaniment to the visuals.

It’s not a very long game and – despite the sometimes harsh difficulty – you’ll likely make your way through it relatively quickly. However, it’s very addictive and can be played in short bursts, making it a perfect pick up and play game. It’s reasonably priced and with further, free content on the way too, I have no hesitation in recommending Scrap – it’s one of those games that, especially with its unassuming name, could easily be lost in the flood of eShop releases, but it definitely doesn’t deserve that fate.