Out Now – Version Played: Switch (£6.29/$7.99) – Developed by: Radoslaw Felich – Published by: Ultimate Games Though the premise may initially seem somewhat tasteless, there’s a fascinating question at […]

Though the premise may initially seem somewhat tasteless, there’s a fascinating question at the core of Blindy: what if Super Meat Boy was blind?

The eponymous character in the rather unsubtly named game he appears in – it’s like if I featured in a game called Slightly-Short-Sightedy – is, yes, blind. By extension, players are too, for the most part – you can only see what’s immediately around your little sightless avatar, with the environment you’ve just passed gradually fading away. Levels would be straightforward, easy to traverse affairs – despite often being laden with traps and deadly scenery – if it weren’t for the fact that you generally can’t see where they are until they kill you. It really does have the feel of a Super Meat Boy style platformer, especially with the sudden bursts of gore that accompany your poor little avatar’s frequent, untimely ends – though of course, it’s Super Meat Boy with the lights most definitely off. 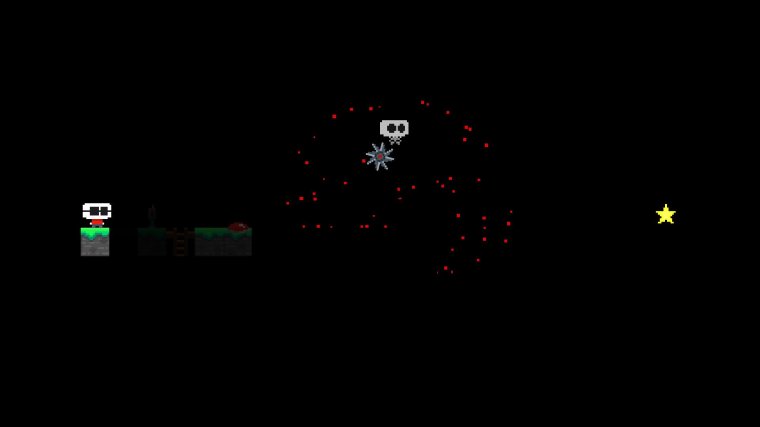 This kind of design would feel painfully unfair and cheap in a ‘normal’ game. In Blindy, it’s intrinsic to the design; you ‘feel’ your way around the scenery and when you get killed by encountering a trap (and you will – over and over again), the trap – and any blood it’s caused to spill when it takes you out – remain for you to see on screen for a vital few seconds, with you kicked back to the start of the stage to attempt another run. Levels quickly become tests of memory, trial and error – along with, quite often, a race to the star that triggers the end of the stage, as the last obstacle that killed you fades out. To add to this, there’s also a coin hidden in each level, though these have proven very elusive to come across so far.

As noted, in any other game I’d be tearing my hair out at the frustrating, unfair level design. Somehow, miraculously, in Blindy it doesn’t feel unfair. It can be infuriating, for sure – but for some reason it’s a weirdly compelling, addictive little game. There’s 60 levels in four game modes, so for the price there’s quite a bit of content here – and the truly masochistic can even hunt for those aforementioned, deviously hidden coins.

Personally, I was just glad to have reached the end of each stage I played – it really does feel like quite an achievement to overcome the tricky placement of traps and sudden lack of platforms in the darkness of each level. I expected to hate Blindy once I realised what the premise entailed, but got caught up in its strangely addictive, hardcore challenge.

I’ve seen little in the way of any coverage for Blindy and that’s a real shame; it’s a unique experience and – though not for the faint-hearted or easily discouraged – provides an awful lot of challenging content for the price. You’ll turn the air blue, for sure – but, with the design seeing you make incremental progress (for the most part) on each attempt at feeling your way around a stage, it’s an ultimately satisfying, clever title that deserves more fanfare. Blindy should, perhaps appropriately, be a game you see for yourself.

If you’ve enjoyed reading this – or any of my other content – it’d be much appreciated if you’re able to share this article via social media.

I’d also be forever grateful if you’re able to support me via: Ko-Fi.com/geekmid or PayPal – all of my work is provided for free and I earn no income from the blog, so any donations are gratefully received and assist me in keeping my writing dream alive.

Above all else though, thanks for reading – I truly appreciate it!