My current obsession with checking out super-cheap old Wii titles continues with Rogue Trooper: The Quartz Zone Massacre, a Wii game based on the classic, long-running British comic strip Rogue Trooper, who has periodically appeared in the weekly anthology title 2000AD since 1981.

I’ve talked elsewhere about my love for 2000AD; being first published in 1977, the year I was born, it was always a staple of my reading material – probably at far too young an age, to be honest. 2000AD has weathered plenty of storms and has survived relatively unscathed, aside from the notable advances in printing and design since the 70s and 80s. Publisher Rebellion, who have owned 2000AD since the year 2000 (and were already successful games developers before their purchase of the comic and its properties) continue to demonstrate that the comic is in safe hands.

When Rebellion purchased 2000AD all those years ago, there was an assumption that we would see a flood of titles based on the big characters from the comic, but there haven’t been nearly as many 2000AD-based games as you’d expect. The output has, instead, been quite subdued.

Though Rogue Trooper has had his own game – which was recently remastered, to great effect – there’s never been a sequel, which is a shame.

Having played the Wii version, I’m definitely keen to see more games based on the seemingly never ending war between the Norts and the Southers on Nu-Earth.

Playing The Quartz Zone Massacre in 2019 does highlight its flaws somewhat; the visuals, as you’d expect, do lack some detail and character models are noticeably blocky, not to mention stiffly animated in many cases. It’s definitely not the worst looking Wii game I’ve ever seen but it’s not up there with the best either. There’s some decent voice acting and the music is pretty good too, however – and there are at least some good cinematics which do a great job of worldbuilding, for those unfamiliar with the original stories. 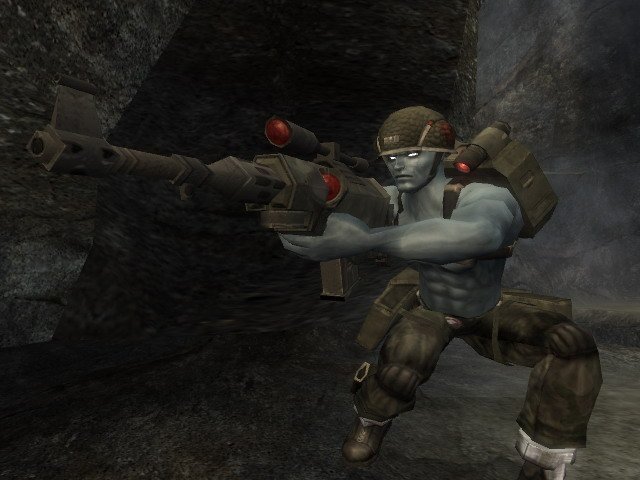 There is an air of repetition at points, too – and objectives are rarely more interesting than getting to a button to press, defending a certain spot on the level or defeating a wave of dastardly Norts.

Another issue I’ve noticed with far too many Wii games is the dreaded addition of unnecessary motion controls. These aren’t anywhere near as bad as I’ve seen elsewhere – they’re far from game-breaking – but, as usual, the game would definitely be better off without them I think. Where it does work – though I’m not sure this counts as ‘motion controls’ – is with aimin using the Wii remote, which is nicely done; the only issue this brings being the occasional effect it has of sending the camera haywire.

There are some unusual and effective colour schemes, however – and Rogue, along with his comrades in arms, are cast in brilliant blue hues with glowing bioluminescent eyes. The good guys are definitely brought to life more effectively and attractively than the other characters in the game. The unlockable art assets and pre-rendered cutscenes do great job of bringing the rest of the universe to life too. 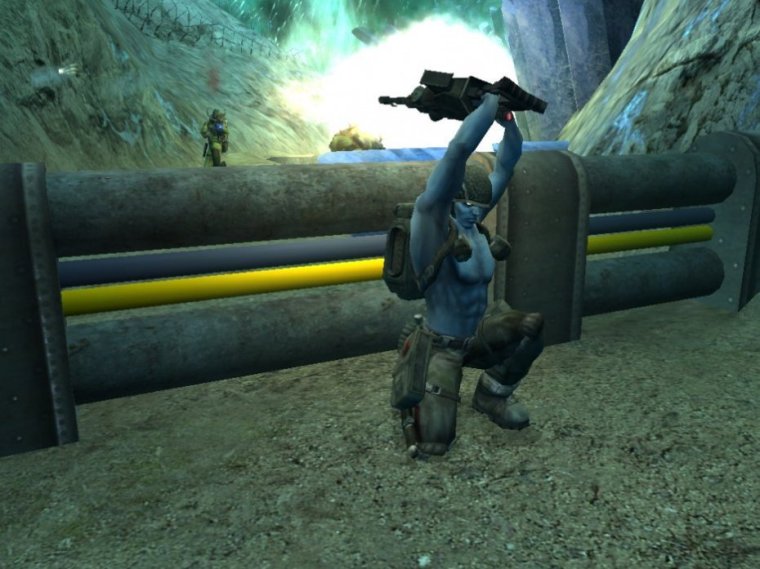 The game itself is well written and nicely paced, with some stealth thrown into the third person shooter style gameplay here and there. The shooting itself is solid and playable, with a decent salvage mechanic that means you can create whatever ammo you need at any given time.

My biggest complaint is with the aiming of grenades and mines, which is made difficult by the awkward camera. Other than that, there’s little I found issue with – aside from the aforementioned, occasionally blocky visuals; which wouldn’t have looked so bad back when the game was new.

As a long term fan of Rogue Trooper, I was pretty much hooked from the beginning. Seeing the world of Nu-Earth come to life in full colour – the earliest comic strips are in black and white, albeit with fantastically vivid and detailed art, courtesy of living legend, Dave Gibbons – was fantastic.

My enjoyment of the game and overlooking of its flaws does probably come from me being such a fan of the source material however – so do be aware that, without prior experience of Rogue Trooper’s hellish vision of sci-fi war, your mileage may vary.

As a full price game on release, this may have been a too short, slightly too undercooked experience. With it now available for pretty much pennies, it’s near essential for fans and worth a look if you’re a fan of third person cover shooters – though do be warned that time hasn’t treated the Wii version of Rogue Trooper well in terms of its visuals and slight reliance on motion controls.