It’s been a while since I wrote about the Transformers Trading Card Game (TCG) – and since my last article, I’ve had the chance to try out a number of really cool card types, thanks to some amazingly thematic innovations from Wizards of the Coast. It’s not often that I’m genuinely impressed with a CCG – I’ve been a Magic: The Gathering player, on and off, since the 90s – but I have to say that Wizards seem to be continually raising the bar for Transformers, which is being treated with incredible respect and a deep love of the lore (hear that, Michael Bay?). Even the first set was incredibly eye-catching and unique, thanks to the beautiful oversized characters that ‘transform’ when flipped over. So let’s take a look at some other card types, shall we?

First up for me, though this is already two waves ago: Combiners. If you know your Transformers, you’ll know that some of them have a vehicle mode, a bot mode and can combine with other Transformers to form a much bigger robot. I would never have thought it possible to do this justice in a CCG, but Wizards have thankfully proven me wrong. Combiner cards have a bot mode side and an alt mode side, as with regular character cards – but they’re smaller, more standard card sized. That’s because they also fold out, beautifully, to become part of a larger character. Collect all of the character cards for that particular Combiner and voila, you have yourself an enormous, deadly machine that’s sure to stomp all over your opponents. It’s very satisfying. 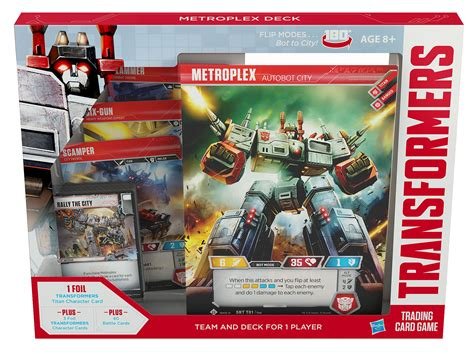 That’s not all. Somehow, Combiners weren’t enough (Transformers fans, are you not entertained?) – there’s also been the introduction of Titans; the only one of which (until last week – I’ll get to that in a minute!) was Autobot City/Bot Metroplex. So this one is more standard in terms of it being a double sided card, but the twist here is the size of it – it’s absolutely huge! Coming in at roughly 20cm x 14cm, it is an enormous card. I say that as if it’s the only twist with Metroplex; it’s not. What’s cool about Metroplex is that, being a city, he contains three characters – Scamper, Six-Gun and Slammer. When flipping to city mode, he can deploy one of those characters onto the battlefield – how awesome is that? So, despite Metroplex costing the full allocation of 25 stars alone (each side in a Transformers game is allowed to use 25 stars worth of characters), the three characters he carries don’t count towards the total – it’s a cheat, in a way, but a very satisfying and incredibly thematic one. 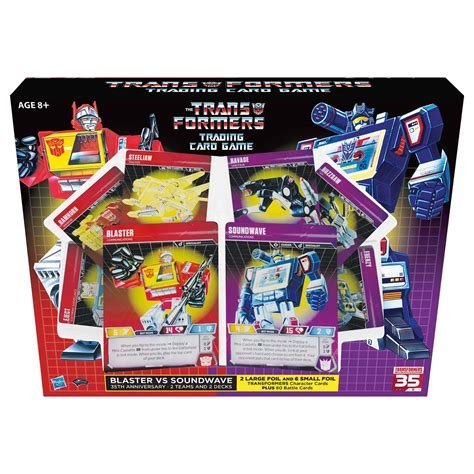 A similar trick occurs with Blaster and Soundwave, with versions of each able to carry ‘cassette’ versions of characters underneath them. Though I’ve yet to try these guys out, I’m very keen to – both are among my favourite Transformers ever (and there’s even a limited edition of their 2-player set that’s illustrated in the style of the original 80s Transformers packaging – it’s absolutely beautiful).

Combiners not enough? How about triple changers? Similar to how combiner cards work, triple changers are fold out cards with three sides – two alt modes and a bot mode. As with Blaster and Soundwave, I’ve yet to get my hands of one of these but I’m very keen to try them out.

Finally, another Titan has just been released – and this time, Metroplex has competition. Decepticon Assault Base, Trypticon, has just been released – and has a similar mechanic to Metroplex, in that he can carry three of his own little dudes around with him – Brunt, Full-Tilt and Wipe-out – also cheating with the points available (though Trypticon’s only worth 24 points, shocking!). I can’t wait to take Metroplex on with this bad boy.

Nor can I wait to see what the future holds for the Transformers TCG. It seems to be incredibly popular at the moment – it’s a very simple game to grasp, but hard to master in terms of deck-building effectively, which gives it an accessibility and a nice level of challenge – and I hope that continues for a long time.

If you’ve enjoyed reading this – or any of my other content – it’d be much appreciated if you’re able to share this article via social media.

I’d also be forever grateful if you’re able to support me via: Ko-Fi.com/geekmid or PayPal – all of my work is provided for free and I earn no income from the blog, so any donations are gratefully received and assist me in keeping my writing dream alive.

Above all else though, thanks for reading – I truly appreciate it!